Oh, this is good, people. For those of you who love Game of Thrones you must go check out this kickass map of George R.R. Martin’s fictional world!

You may now go about your business.

Result: Much OUTCRY! Check out MTV’s movieblog: Jennifer Garner Not to Play

Now, for the record: I’m not really opposed to the idea.

Though, I have a few thoughts on the idea of a reboots/remakes/rewhatevers.
1. The reboot/remake/rewhatever needs to keep its integral relation to the original.
Let’s take the Smurf movie for example. I have not seen this movie, but based on the previews it seems like the producers/writers/whoever-in-charges missed the fact that these are fantasy creatures, set in a fairy-tale like world. That’s the only reason they are not as ridiculous as they could be. Putting them in New York? Really? Wouldn’t the story have been as good (if not better?) in the fantasy world they already exist in? You can’t take away something like that or it seems, well, stupid.

To make Miss Marple young is a verrrry questionable thing — but it can still be made integral. After all, Miss M. had to be young at some point. She had to gain the observational experiences that make her so gifted as an older character. A young version would be interesting in that regard.

2. The reboot/remake/rewhatever should not be back-to-back with the original.
For example, Spiderman.  I recently learned that they’re doing a reboot. Why? Sure, that last movie was not the best (and, actually, if they’d just struck the Sandman bit, it wouldn’t have been so convaluted–one bad guy too many, people!), but it sure wasn’t the downfall of the franchise.

Miss Marple hasn’t had a blockbuster series/movie in a while. It’s about time for us new generations to find her.

3. (and this may seem contradictory to #1, but isn’t): If you’re going to do it, own it.
Batman. Been there, done that, right? Yet every time a new director or new vision comes to it, it seems to improve. Michael Keaton’s Batman was light years ahead of Adam West’s. And the Christian Bale reboots have been Oscar worthy. If you watch the three different Bats back-to-back, each of them has their own distinct feel and look…yet all of them are still Batman.

Seems like the idea of making Miss Marple young, and casting Alias ass-kicker Jennifer Garner to star is something that you’d have to own, if you’re going to do it. I think that Garner is a talented enough actress (loved her in Juno and The Invention of Lying) it would be interesting to watch her play a young Miss Marple — because, let’s face it, it’d have to be Miss Marple’s personality that shuts down the suitors if she’s got Garner’s face….

I just found this fascinating article about one of our previous mentors, Virginia Woolf, by Michael Cunningham — who did such a beautiful job portraying her in his own novel The Hours. Cunningham talks about his own writing journey and his mom:

Virginia Woolf, my mother and me

Plus, if you’ve missed V.S. Naipaul’s scandalous remarks regarding writers of the female persuasion, (ahem, we apparently are sentimental and have a narrow view of the world, plus we’re never master of our own house….) you can check them out here and, should you wish to take the quiz go here.

I’d be really interested in hearing about your quiz results…I got six outta ten, but I don’t count missing Nicholas Sparks…Okay! Okay! I take that back….=)

jenny maloney1 Comment
Some of you may or may not know that Wodehouse also dabbled in poetry. In that enterprising spirit, I shall regale you with my own poetic presentation on what I’ve been doing this week. With photos!

Which we did not read, because we’re bad, bold wingers
Who guess at tile wet saw use–makes for some zingers!

After much knee-breaking bending and heavy lifting,

after much finger-risking and tile-color sifting,
and, of course, a lot of energy expenditure…
we arrived at the end of our big adventure!

Et VOILA! The results of our hard work and dedication: 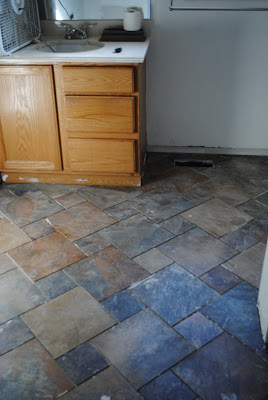 jenny maloney1 Comment
The holiday season begins in earnest now. Shane (teacher) and Owen (student) are both out of school today. There’s only one week left!
And a shot of our Christmas tree to help pass the holiday spirit along. Good luck everyone!
**Technical difficulties repaired! Voila, my tree:

How are you guys hanging in there?

I Write Like by Mémoires, Mac journal software. Analyze your writing!

If you need a distraction from writing, this is a fun one!

**The Raymond Chandler result was for the La Llorona novel. I threw in bits from my other novel and got Stephen King, threw in a different short story and got James Joyce. It’s fun to see what others come up!

The kids are settled into their new rooms. The living room has been cleared of the debris of ‘stuff’. And my writing area is free of stacks of papers and books–meaning I can now reach my keyboard without a towering stack of critiques-to-do and work-in-progess papers falling onto my head.

In other words, my writing space is now under control. This is a relief because there is quite a bit I want to finish before the end of the month. 30 pages of Llorona, a background story for The Line, plus I need to finish reading Ali’s Crossroads Promise for CWC–which is rapidly approaching!

Of course, the only one of those that’ll get done will be Ali’s stuff. When you’re interrupted by re-modeling the house, it takes a bit of time. And time is the stuff writing is made of. But I’m trying to take it easy on myself for this month. After all, it’s better to start in a place that’s under control because you’re going to lose that control at some point–if you didn’t have a good place to start from, then you have no place to return to and you run in circles and accomplish a whole lotta what?

Let’s not do that.