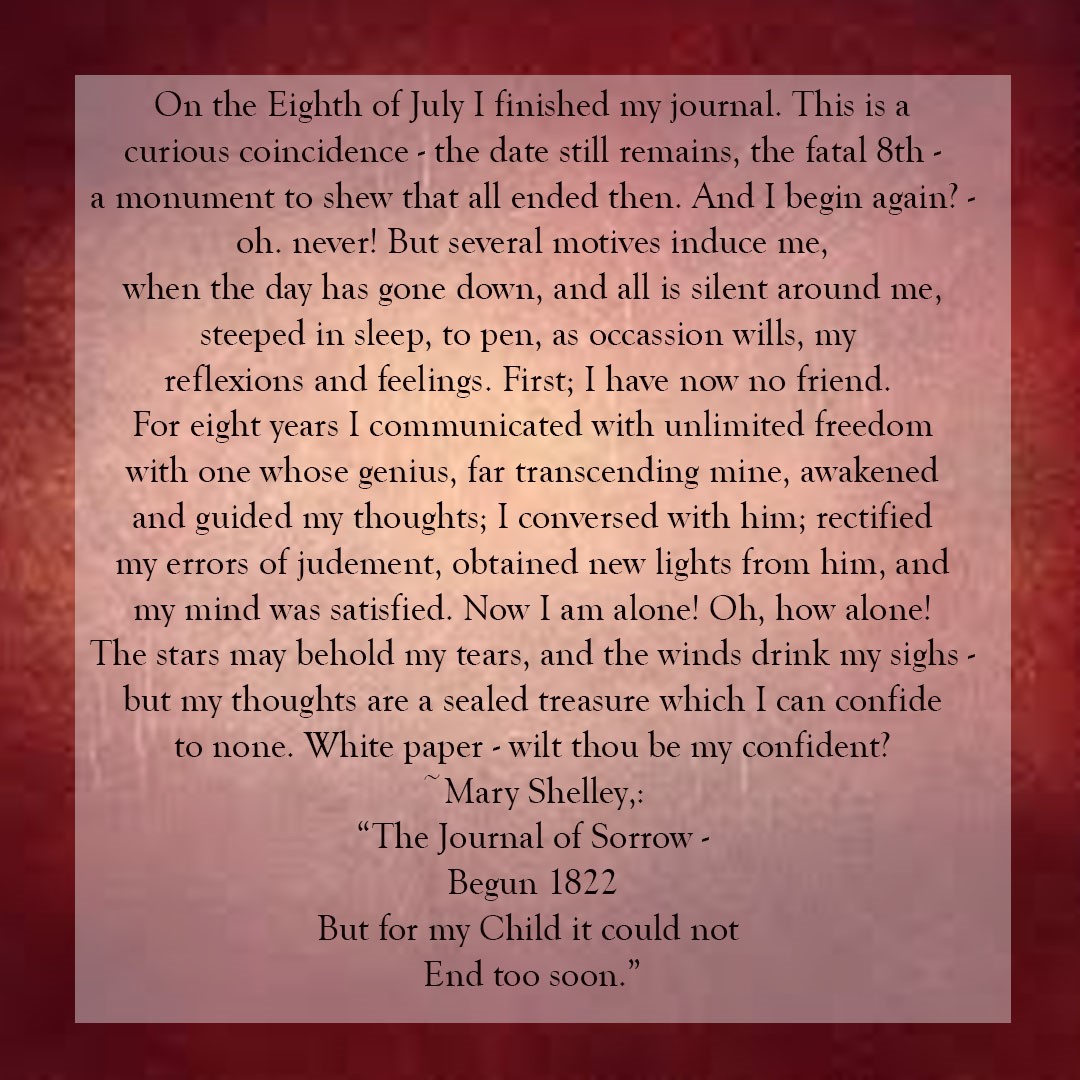 Months later, Mary Shelley wrote the following in her journal:

If you ever get the chance to read the whole entry, it will break your heart. (If you’re not a cold-hearted bastard, that is.) She continues to explain how the only comfort she has is in engaging her intellect – because it’s the only way she can distract herself. And, if you direct your attention to the final question:

“White paper – wilt thou be my confident?”

I don’t know how you read that, but I read that sentence as a plea. Shelley seems to be looking for something to kill the unbearable loneliness that comes with grief…and, in fact, that sense of being alone is probably the real, defining pain of grief.  So she’s asking this blank sheet of paper for help filling that hole.

But, as many of us know, holes are hard to fill.

We don’t often talk about how grief affects the creative process. I think, often – and like Mary Shelley – we look to our creative endeavors to help heal ourselves.

What happens when we just can’t?

Look, lots of things can cause grief and the loneliness that comes with it. Death – of a family member, a lover, a friend, a pet.  Divorce or breakups. Distance – from a move or an estrangement. Even the loss of a job means that you no longer see people you were used to seeing every day. Some of these things are a surprise. Sometimes you have a chance to “prepare” – whatever that means, right?

But, no matter the how or when…these things hurt.

Sometimes hurting means you just can’t pick up that pen, or touch that keyboard, or that paintbrush, or that camera, or whatever it is you use to create. You just cannot get your brain in the right space. All you can think about is how he would brush your hair out of your eyes. Or how she curled up right up against your ribcage. Or the way he cracked jokes at inappropriate times. Or how she twirled her hair when she was nervous.

Or maybe it’s been longer – and that one song came on the radio today and, dammit, you are FEELING THINGS.

As much as we like to think that our creativity can see us through anything, and despite the fact that often we’re thinking – “I’ll be able to use this in a story” …

… it’s like Stephen King said in his great book On Writing: “Life is not a support system for art, it’s the other way around.” And – not to be too prosaic – but sometimes life sucks.

So, if you’re like any other writer I’ve ever met, you’re probably pretty hard on yourself if you’re not in writing mode. And, when you’re grieving it can feel doubly hard…like your life has gone completely haywire. Like you can’t do anything that you used to do. Then you think “How can this be happening? I’m losing everything. First [insert loss] and now my writing.”

First: your life might indeed be haywire for a little while. I am here to tell you that, while it is incredibly hard – maybe the hardest thing you’ve ever gone or will ever go through – it will not be this hard forever.

Second: It is okay to hurt. People always try to make you feel better, and that’s incredibly sweet of them. Have some mercy on them and their efforts. But you have to let that loneliness, that pain, that anger, that grief do its thing. You have to let yourself miss your friend. And maybe that means you don’t write for a while.

I think Mary Shelley does some smart grieving things. (Does that seem rude? It’s not meant to be. I admire it.) For example, the entry quoted above was written in October, not July when Shelley died. Her life went haywire and she had to scramble and deal with that. Including getting some harsh backlash from her in-laws and her family, questions about where she could live, and how was she supposed pay for anything? Chaos.

And she allowed herself to hurt. It’s right there in the words. She is woman who is hurting and lonely and looking for somewhere to put all that emotion.  She chooses to put it in her journal…a journal she once shared with her husband.