We’re going to finish up our exploration of Kerouac with a couple of differing opinions on the form “genius” takes.

“Let’s examine the word ‘genius.’ It doesn’t mean screwiness or eccentricity or excessive ‘talent.’ It is derived from the Latin word gignere (to beget) and a genius is simply a person who originates something never known before. Nobody but Melville could have written Moby Dick, not even Whitman or Shakespeare.” ~ Jack Kerouac, “Are Writers Made or Born?”

If you get a chance, you should really read the whole text of “Are Writers Made or Born?” – Kerouac covers a lot of ground in a short space of essay. In it, he talks about the difference between a genius and an interpreter. His argument is that a genius is someone who does something that has never been done before: like Walt Whitman with poetic lines or James Joyce with the stream-of-conciousness thing.

He goes to explain the idea of an interpreter: “I always laugh to hear Broadway wiseguys talk about ‘talent’ and ‘genius.’ Some perfect virtuoso who can interpret Brahms on the violin is called a ‘genius,’ but the genius, the originating force, really belongs to Brahms; the violin virtuoso is simply a talented interpreter – in other words, a ‘Talent.’”

So, in other words, there are genius writers and there are interpretive writers. You can be talented, but still not be a genius.

I don’t know if I entirely agree with this assessment. I’m more inclined to think that there are two types of genius.

The first type is identical to Kerouac’s definition of genius – the guys and gals who put out something that hasn’t been seen before. You know their names: James Joyce, Walt Whitman, Emily Dickinson, and even Gertrude Stein’s weird repetition, weird repetition.

However, I have to disagree with his assessment of interpreters not being geniuses in their own right.

In his essay he brings up Thomas Hardy – a genius writer, right? Kerouac thinks so, and I think so, but Kerouac says that Hardy was an originator…and there I have to disagree. I say Thomas Hardy was a kick-ass interpreter.

He wrote long, sprawling, Victorian epics whose subject matter stretched the boundaries of what was ‘decent’ or ‘acceptable’. But he didn’t create the three-volume form that was so popular during the Victorian period. Nor did he develop the serialized epics that were equally as popular…and in which he participated. Nor did he create the idea of writing epic tales of relationships, industrialization, or interfamily conflicts. He’s a genius the same way George Eliot and Charles Dickens are geniuses: working with subject matter, and working within a structure that’s already been developed, and telling the world as they see it, building on the authors that have come before. That’s interpreting something, not creating it.

Now, Kerouac defends Hardy as a genius because, no matter what, Hardy would always write like Hardy – and I see and appreciate that argument. But I’d also argue that a genius interpreter would always sound like him or herself. If we’re going to use some musical examples, yes, Brahms is an originating genius…but he doesn’t sound the same when performed by, say, Yo-Yo Ma. It takes on a new life. You know when Yo-Yo Ma is playing. That skill level, that talent, is a form of genius.

I came across this fascinating book called Windblown World: The Journals of Jack Kerouac 1947-1954 — which covers the period of time when he wrote his first novel The Town and the City and his second On the Road.

Basically, it’s a log of his word counts, which are insanely high (but we talked before about how much he writes) and his emotions as he writes. Check this out:

“This thought, concerning the change in my writing which now seems so important, came –: that it was not lack of creation that stopped me before, but an excess of it, a thickening of the narrative stream so that it could not flow. Yet tonight I’m really worried about my work. First is it good now? — and will the world recognize it as such. The world isn’t so dumb after all; I realize that from reading some of my unfinished or unsold novels: they are just no good. I will eventually arrive at a simplicity and a beauty that won’t be denied — simplicity; morality; and a beauty, a real lyricism. But the now, the now. It’s getting serious. How do I know if I’m reaching mastery?“~Kerouac, entry dated November 10

I know, right? If he writes this way in his journal, obsessing about the beauty of words and worrying about mastery…well, he was probably gonna accomplish something, right? There are pages of this stuff in this book. Kerouac goes through the writerly schizophrenia that’s in all of us writers.

I think the fear comes, no matter how hard we work, because we wonder if we’re good enough, if anyone will ever notice, and whether the work is worth noticing at all. Self-doubt is an obstacle we all have to overcome. Even Kerouac.

(Or maybe that’s just my fear and you guys are all fine and dandy.)

The answer is the same regardless of whether you’re fearful or not: write and find out what happens.

Agree or disagree, Twain has a point. To illustrate, I give you two passages from On the Road — the 1957 version and the Original Scroll version.

In the following section of the book, Kerouac has just offered to stay overnight on an old boat. (Character names are different in each passage. For clarity purposes just realize that Remi=Henri and Lee Ann = Diane.) Note that the character of Lee Ann/Diane is naked and sunning herself on the boat deck. Kerouac’s character is looking at her from above, on the poop deck.

Here is the first one, from the 1957 version of On the Road:

“Remi was astounded; his admiration for me doubled. ‘Sal, I’ll pay you five dollars if you have the nerve to do that. Don’t you realize this thing may be haunted by the ghosts of old sea captains? I’ll not only pay you five, I’ll row you out and pack you a lunch and lend you blankets and a candle.’
‘Agreed!’ I said. Remi ran to tell Lee Ann. I wanted to jump down from a mast and land right in her, but I kept my promise to Remi. I averted my eyes from her.”

“Henri was astounded; his admiration for me doubled. ‘Jack I’ll pay you five dollars if you have the nerve to do that. Don’t you realize this thing may be haunted by the ghosts of old seacaptains. I’ll not only pay you five I’ll row you out and pack you a lungh and lend you blankets and candle.’ ‘Agreed!’ I said. Henri ran to tell Diane. He was amazed at my courage. I wanted to jump down from a mast and land right in her cunt, but I was true to Henri’s promise. I averted my eyes.”

You’ll note some obvious differences: There are no paragraph breaks in the Scroll version. There are fewer commas in the Scroll version. Kerouac fixed the “I was true to Henri’s promise” — where it sounds like Henri made a promise instead of Jack, in the 1957 version. He also cut the scroll line about Henri being impressed by his courage in the 1957 version. (Probably so he didn’t sound quite so egotistical to the reader.)

Now I’m going to do something I never thought I would do, and defend the word “cunt.” (You have no idea how much I hate this word.)

However, that’s also a phrase utilized in romance novels when the couples make love. In today’s terminology, it can have romantic undertones.

So…the more vulgar word in this case is more clear, more in tune with the character’s wants and desires, and is definitely, definitely more striking to the reader. Why not just slap the reader with a dead, wet fish to wake them up? It is effective.

Another thing changes with that one word: the tone. The 1957 excerpt almost feels Peter Pan-esque. The focus seems to stay on sea captains and ghosts and boys playing around. Even the ‘in her’ seems more like flying playfulness. Not so much in the scroll version. We are reminded that these are grown men who perform grown-up acts and can cause grown-up pain. It raises the stakes.

All of those things were edited out, and it still remains a classic. And interestingly, according to a very unscientific Goodreads poll – more readers seem to have given more stars to the Scroll version. Could it be because the 1957 version was edited too cleanly? I think: yeah.

Kerouac wrote On the Road on one long, continuous scroll of paper. He plugged away on a typewriter and chugged that bad boy out in about three weeks. It’s time we did the same, word-writing friends.

Okay. I know. We don’t work on typewriters anymore (except for you in the back).

And…I know it’s unlike that any of us will finish a masterpiece in three weeks (except for maybe you in the back).

With the advanced technology that is a computer screen and many different writing software programs, we have the benefit of a scroll right now. Open up a new word document, or a Scrivener project (Scrivener’s fun cuz you can blank out the back screen and basically have a virtual scroll), or whatever word processing software you use.

Then cut and paste whatever comes out into your blog and link to it in the comments section so we can see your Beat Genius moment.

Remember: “You’re a genius all the time.” ~Kerouac 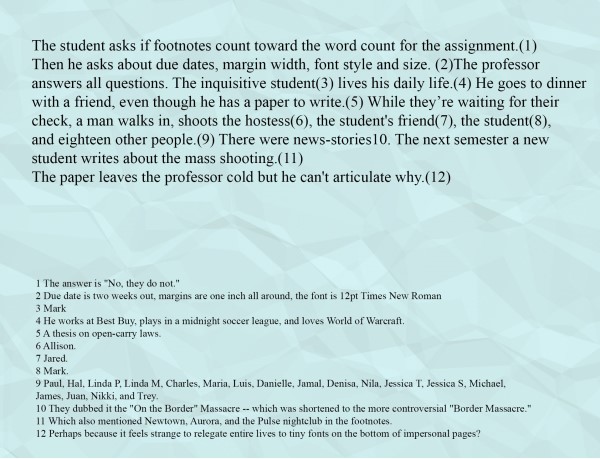