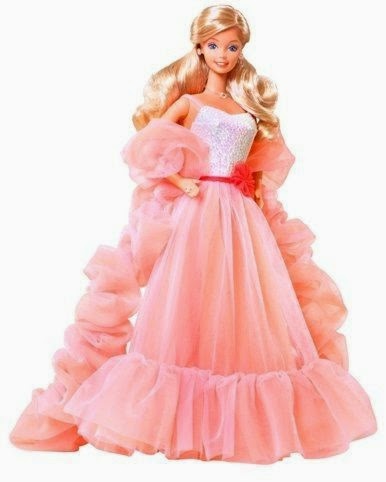 I grew up loving Barbie. My closet was filled with Barbies and Skippers and Kens. These toys had dream houses and cars and closets with more clothes than any human being I’ve ever met, before or since. My parents spent hundreds — if not thousands? — of dollars on these dolls and all their accessories.
I cannot emphasize enough how much I loved these toys. Hours and hours were spent making up adventures for them to go through. Proms. Murder mysteries. Fashion shows. Rock concerts. (Jem and Holograms was also popular at this point in time and I even had a cassette of the music.)
Needless to say, if the Barbie animated movies had been out at this time, I would’ve been all over those too.

Then, in third grade, I had a friend — Dionne — who was a terrorist of a storyteller.

We were at the park. (I remember this distinctly. It was the park we referred to as The Wooden Park because all of the equipment was, you guessed it, made of wood.) We were sitting on the swings, just talking, like kids actually do. We’d been playing some kind of Pretend, which I’m sure involved pretending to be Barbie.
And then Dionne decided to tell me about her cousin, who lived in Puerto Rico. I’m not sure why this detail is important, but I think it’s because it made the whole story seem magical enough to be real. I’ve never forgotten it.
(Before I continue, I should let you know that I was a very gullible, shy, generally frightened child. I freakin’ cried when teachers would call my name during attendance. You’ll be happy to know that I’m now a gullible, more outgoing, generally cautiously nervous adult.)
Anyway, Dionne’s cousin had a birthday party where she’d received this Barbie. I want to say that Dionne was detail oriented enough that it was a Peaches and Cream Barbie, but I could have filled that in with my own detail-oriented imagination. All well and good so far?
That night, the night of her birthday after all the presents have been opened, the cousin is woken up by something crawling on her chest. She looks down and sees Barbie (the Peaches and Cream Barbie in my imagination, remember).
Then Barbie tells Dionne’s cousin, “Get me some coffee.”
Dionne’s cousin, scared to death, obeys and gets Barbie her coffee. (I should’ve probably questioned the veracity of Dionne’s story here. As a seven year old, I had no idea how to make coffee and Dionne’s cousin was supposedly our age. But, different seven year olds have different skill sets I guess.) Everything’s fine.
The next night, the same thing happens. And, again Dionne’s cousin gets the coffee.
On the third night — man, Dionne does have a good grasp of storytelling…setting up the pattern and then breaking it…gotta admire it — Dionne’s cousin refuses to get the coffee.
In the morning Dionne’s aunt goes to wake the kid up and finds her child dead on the bed. Carved into the cousin’s chest — as if carved with a small, sharp, plastic ninja hand from hell (see picture above!) — was “You should have got me my coffee!”
Ummmm. Yeah. I totally freaked out. And the girl — me — who loved Barbie, worshipped Barbie, owned miles and miles of Barbies with accessories, and had survived endless nights sharing a room with dozens of Barbies, REFUSED to have anything to do with them again. I locked those bitches in a closet and refused to play with them. Eventually, we donated them to my mom’s first grade classroom.
My mom still hasn’t quite forgiven me.
I’m bringing this up now because I just finished reading Stephen King’s short story “Chattery Teeth,” which you can find in Nightmares and Dreamscapes. This is the second story by King that I’ve read involving toys. The other one is “Battleground,” involving those plastic army soldiers we all had and promptly lost when we were little, which you can find in Night Shift.
As I was reading “Chattery Teeth” I was disturbed, but not really frightened. It takes a lot to scare me in a story nowadays. But, being disturbed, I wondered why? I remembered being equally disturbed by “Battleground.”
Seriously, when you stop to think about it, these are not the stories that should be disturbing you as a reader.
Then it occurred to me that I was disturbed because of the details King used in those stories. The wind-up element of the Chattery Teeth. The way the teeth clamp down. Even the stupid little orange feet with spats that move inevitably forward. The weapons used by the tiny soldiers in “Battleground.” The helicopters that fire missiles.
Like the carving plastic hands in Dionne’s story, there’s something visceral and real about those details. We’ve all touched the novelty toys and we know how those plastic bits feel. King does a really good job of bringing those elements into those two particular stories — which, honestly, otherwise feel like they’re novelties in and of themselves. That’s what I was responding to.
And those details may have caused flashbacks to my own childhood fears.
Did you get terrorized by a similar story when you were little? What author brings that kind of disturbing detail to life for you?